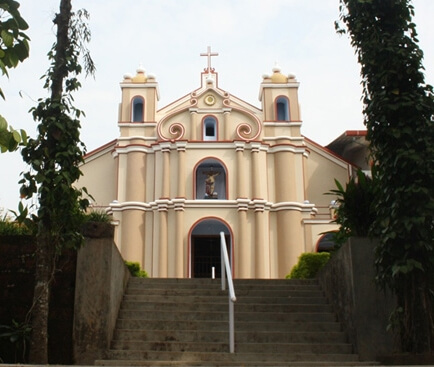 Sep 8: I would never die for my beliefs because I might be wrong.- Betrand Russel

That is what I thought when my long-held belief about the origin of Monthi Fest in in Farangipet, near Mangaluru, was upturned by a Jesuit priest from Panjim, Goa – and he seems credible. But, before we come to the Jesuit’s claim, first the background facts.

The churches and Catholics in Tulu Nadu are set to celebrate Monthi Fest on September 8 know it is the day of Nativity – the birth of Mary, Mother of Jesus. But, by far hardly anyone stops to think why it is called Monthi Fest. Some research and inquiries with persons who should know, in early 2000s, led me to the conclusion that Monthi Fest originated at Farangipet about 250 years ago.

Farangipet is home to an ancient Catholic institution which at various times has been, and still is, a church, friary, monastery and seminary. Located on top of a hillock, on the north bank of Netravathi River, the official name of the place is Monte Mariano – Mount of Mary. The Monthi Fest derives its name, with little corruption, from Monte. It was here that a Goan secular priest, Fr Joachim Miranda, started this annual feast to coincide with the feast of Nativity of Mary.

But, Catholics generally are unfamiliar with the Monte Mariano name and call the place Coventh (convent). They cannot be faulted because even the RTC, based on ancient land records, notes the owner of the plot as “Monthu Mary Cuvent Devaru”. This is the basis of the fading history of Monte Mariano.

What is this history? In 1510, the Portuguese conquered Goa and founded their empire in India. In 1526, some Franciscan priests entered Canara and founded three churches around Mangalore – Lady of Rosary at Bolar (now Cathedral), Our Lady of Mercy at Ullal (Panir) and St Francis of Assisi at Farangipet. The last name means foreigner’s town (farangi-foreigner -plus- pet – pete or small town). It hosted Portuguese traders who used the river route to reach, and exit from, there.

Hyder Ali conquered Bednore Kingdom in 1763. During his time, Fr Joachim Miranda was the Parish Priest at Farangipet. He was a man of exceptional holiness. Hyder Ali sought his favour and asked for his prayers for the success of his military campaigns and also made votive offerings in Monte Mariano Church. For his son, Tippu Sultan, Fr Miranda was a problem. He was aware that the priest and Hyder Ali were good friends and the latter held the former in great regard. Tippu began showing respect for the priest but was determined to capture Catholics and hold them captives in Srirangapatnam. Tippu inquired of Fr Miranda information about British General, Mathew. On his refusal to oblige, Fr Miranda was banished to Tellichery. Incidentally, while Tippu destroyed all churches in Canara, he spared Monte Mariano in deference to his father’s friendship with Fr Miranda.

That is the Fr Miranda who started the Monthi Fest. Until a few decades ago, Monthi Fest was celebrated on a grand scale at Monte Mariano, with surrounding parishes participating. Large number of devotees from Mangalore, including tile manufacturers and coffee planters, footed it out to Farangipet for the feast. All this is faded memory now and so is the origin of Monthi Fest.

There is religious symbolism in Monthi Fest. Anna, mother of Mary, was barren till she was very old. So, her first child is considered to be a journey from barrenness to first fruit. That is the rationale of celebrating Nativity also as harvest or new corn festival. It is notable that Onam, harvest festival of Malayalees, and Chowthi are celebrated around this time.

On Monthi Fest day the matured bunches of paddy corn on stalk are brought to the church, blessed and offered to the congregation. A special prayer recited at the blessing reads: “Bless these new fruits in your blessed name… Grant health of body and soul to those who receive these new fruits in your blessed name”. The blessed stalks of new corn are taken to every home and is partaken with prayers and devotion. The de-husked corn is powdered and mixed with milk or a special dish made out of coconut milk and rice batter – a sort of kheer or payasam. Traditionally at least nine vegetables are cooked.

The most impressive part of Nativity is the novena that precedes the feast – nine days of devotion involving offering of flowers to Mary by children. The image of infant Mary is placed on a table and devotees approach it and offer flowers from their trays even as hymns are sung. Children who participate in the novena and flower-offering are presented sweets and sugar cane.

Now, we are told that Monthi Fest started in Goa if we go by a letter from Panjim-based Fr Pratap Naik, SJ, published in Raknno (3-9-15), the Konkani weekly of the diocese of Mangaluru. According to him, in Goa at the end of Shravan month (this year from August 15 to September 13) Bhadrapad month commences. On the fourth day of this month comes Ganesh Chaturthi. For this feast all members of the family gather and celebrate from one-and-half to ten days. During this festive period Lord Ganapathi’s image is installed in the house and flowers are offered to it daily. On one day during this festive period new corn is ceremoniously partaken.

Fr Naik explains that in the 16th century Jesuits and other religious orders promoted Christianity. In the present “Old Goa” Alphonso Albuquerque, in 1519, constructed on a hillock a chapel, named “Capela de Nossa Senhara de Monte” in honour of Our Lady. In Portuguese Monte means mountain. (Both at Farangipet and Old Goa the so-called “mountain” is a low hillock) This chapel is still there. Its feast on September 8, called Monthi Saibiniche Fest”, had been started in the 16th century and continues to this day.

After Hindus from Tiswadi were converted, Jesuits taught the new converts to offer flowers to honour of Monthi Sabin just as they offered flowers to Ganapathi before their conversion. Thus, the Nativity feast which is celebrated all over the Catholic world on September 8 came to be called “Monthi Saibiniche Fest” (Lady of the Mount Feast) in Goa. The Konkani-speaking converts of those days followed the Hindu traditions associated with Ganapathi fest and celebrated the corn fest with vegetable menu on September 8. Thus was born today’s Monthi Fest. It is significant that Fr Joachim Miranda, who started Monthi Fest at Farngipet in the second half of 18th century, was of Goan origin and would have been familiar with the fest celebration in Goa. The original host of Monthi Fest is, thus, Goa – maintains Fr Naik. Amen to that!

There is a bit of nostalgia about this article which I wish to share with Daijiworld readers. On returning to Mangaluru in 2000, after 40 years in Bombay, I resumed free-lance writing in Vijaya Times (now extinct) – writing three articles a week. The article on Monthi Fest was one of those early articles and was reproduced in Daijiworld – without them knowing who I am or where I am. It was my boni in the electronic media. Little later, Daijiworld “discovered” me and the rest is history for me. With encouragement by kindly godfathers in Daijiworld, I have since build up a record of perhaps the longest list of articles in Daijiworld archives – after my friend Florine Roche who has been with Daijiworld from its launch to now with her prolific, versatile and very readable contributions.

Veteran journalist and author, John B Monteiro now concentrates on Editorial Consultancy, having recently edited the autobiography of a senior advocate, compiled the history and souvenir to mark the centenary of Catholic Association of South Kanara and currently working on the history/souvenir to mark the platinum jubilee of Kanara Chamber of Commerce & Industry. He is also Editorial Consultant and content provider for Vishal Jagriti, the English monthly of All India Catholic Union, now published from Mangaluru.

By John B Monteiro