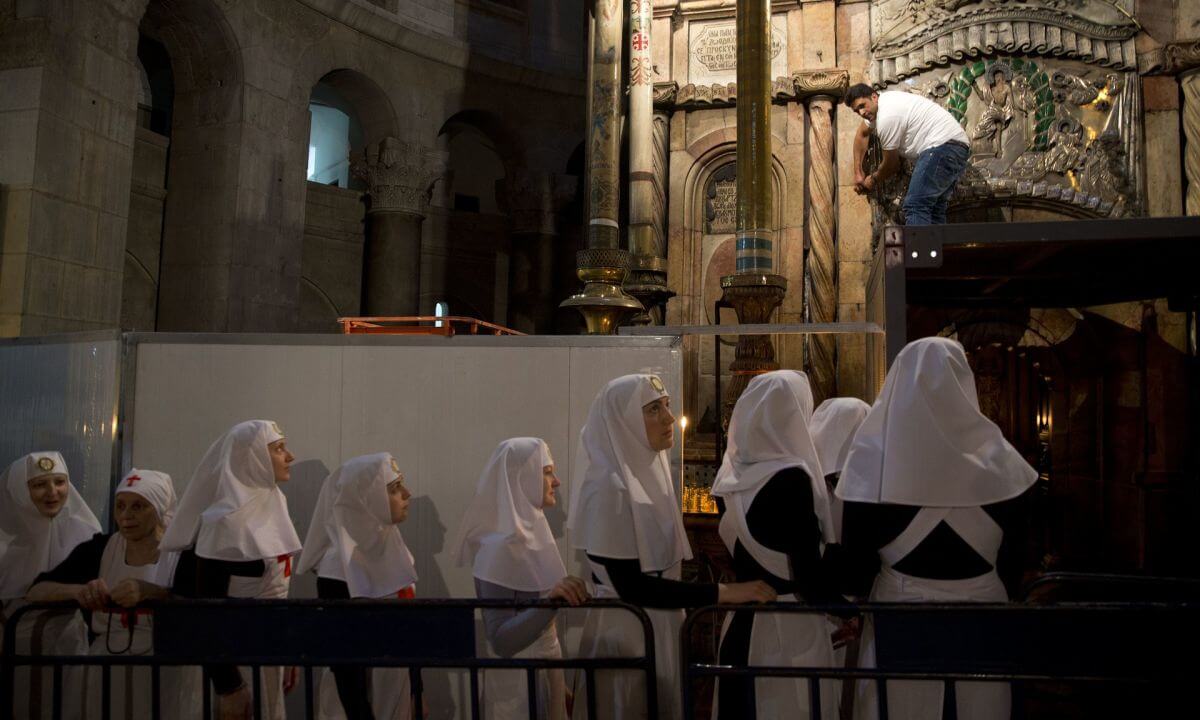 A delicate and sensitive project to restore the most sacred monument in Christianity has been boosted by a $1.3m philanthropic donation that will help preserve Christ’s tomb in Jerusalem as a destination for pilgrims for generations to come.

The World Monuments Fund (WMF) announced on Tuesday that the gift from Mica Ertegun, the widow of Atlantic Records co-founder Ahmet Ertegun, would allow work to begin in earnest on the conservation project inside the Church of the Holy Sepulchre in Jerusalem’s old city.

The restoration of the Edicule of the Tomb is being undertaken by a team of Greek conservationists from the National Technical University of Athens, which has previously worked on the Acropolis. It is the first restoration work on the tomb for more than 200 years.

The project is expected to cost nearly $4m (£2.7m) and to be completed by next spring. As well as Ertegun’s donation, the Christian denominations that jointly run the church and King Abdullah of Jordan have committed funds.

“Last year, the Greek patriarch felt the monument had finally reached the stage where work couldn’t be put off any longer,” Lisa Ackerman, the executive vice-president of the New York-based WMF, told the Guardian.

“This spring, the Greek team came in and formulated a conservation plan, and a few weeks ago the initial scaffolding was built and an on-site lab constructed. Now the physical intervention is about to start.”

The chapel above the tomb where Christ is believed to have been buried and resurrected is in danger of collapse. It has been rebuilt four times, most recently in 1810, two years after it was ravaged by fire. The structure is currently held up by iron girders put in place in 1947 by the British governor who ruled Palestine in the Mandate era.

After clearing away layers of soot created by candles and lanterns, the Greek team will stabilise the structure with titanium bolts and mortar. The work involves the use of radar, laser scanners and drones, with the conservationists working mainly at night to allow continued access to the shrine to pilgrims.

The conservationists will remove, clean and reattach the exterior marble cladding of the chapel, reinforce the bearing structure and repair a fracture in the rock.

At some point a slab worn smooth by millions of kneeling pilgrims will be lifted, allowing the experts to look inside at the rock-carved tomb itself – the first time it will have been seen for more than two centuries.

The restoration project has been stalled for more than 50 years as the Christian denominations that manage the church struggled to reach agreement on how the work should be carried out.

Six communities – Latin (Roman Catholic), Greek Orthodox, Armenian Orthodox, Syrian Orthodox, Ethiopians and Copts – share custodianship of the church. They have periodically become embroiled in bitter disputes, sometimes involving physical violence, over their territories and responsibilities. In a sign of the mutual mistrust between the denominations, the keys to the church have been held by a Muslim family since the 12th century.

The Church of the Holy Sepulchre covers the assumed site of Jesus’s crucifixion, burial and resurrection. It is a vast, cavernous site with numerous dark recesses, hidden chapels and tombs. Pilgrims from all over the world, many weeping and clutching precious mementos or photographs of loved ones, jostle beneath its soaring domes every day.

Long queues form to enter the chapel over the tomb, which falls under the auspices of the Greek Orthodox community. The Latin community celebrates the Eucharist inside the chapel from 4.30am each day.

The day before the Orthodox Easter Sunday, thousands of pilgrims pack around the tomb to witness the Miracle of Holy Fire, in which lit candles are passed through the dense crowds in a highly hazardous ritual.

Patriarch Theophilos III of Jerusalem welcomed Ertegun’s gift. “The Holy Sepulchre is the most sacred monument of Christianity. The resurrection of Christ from the tomb is the foundation of our faith, and Christians throughout the world revere this place for its spiritual importance. The restoration of the Edicule is of primary importance. We are grateful for Mrs Ertegun’s lead gift, which has allowed work to begin,” he said.

Ackerman said the project’s timescale was realistic, although “you get a certain distance into the project and inevitably find things you didn’t expect”. The team would work “crazy hours”, she added.

A total of about 50 experts will be involved, although the team will expand and contract according to need over the next nine months. As well as financial support, the WMF will provide general oversight.

“It’s important to preserve these sites for people who cherish them,” she said. “And it’s also an opportunity to bring people together in a place where there is often contention.”