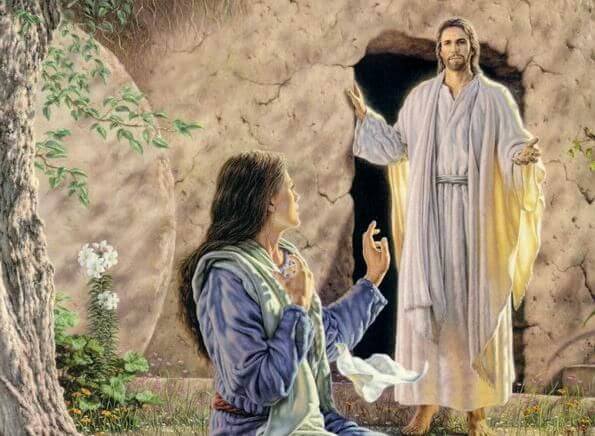 Who did once upon the cross, Alleluiah!

Suffer to redeem our loss, Alleluiah!

For Christians, Holy Week, starting on Palm Sunday and ending with Easter Sunday (March 27 in 2016) is considered the focal point of ecclesiastical and liturgical year. The last three days of the week – Good Friday, Holy Saturday and Easter Sunday – are called sacred triduum. Together they make up “Holy Three Days” feast of Christ crucified, buried and risen from dead. During these days oils, water and fire (Easter candle) are blessed to make them holy and use them for the rest of the year for baptism, etc. On Holy Saturday, Christians wait at the tomb of Jesus, meditating upon his Passion, death and awaiting, in prayer and fasting, his Resurrection.

The central point of Christianity pivots on Resurrection. Jesus had repeatedly talked about Resurrection and rising from the dead on the third day. Speaking in parable, he had talked about destroying the temple and rebuilding it in three days – even as the Jews scoffed at the claim saying that it had taken their ancestors forty years to build the temple. So, after Jesus died on the cross, his disciples and followers were tossed between hope and despair. Fearing torture from the Jews they made themselves scarce, huddled behind locked doors.

After the death of Jesus on the cross, Joseph of Arimathea, a secret disciple of Jesus, obtained Pilate’s permission to bury Jesus. Along with Nicodemus, they took the body of Jesus and bound it with linen cloth and spices. Near the spot of crucifixion, there was a garden in which there was a fresh tomb in which the body was buried. They rolled a stone against the tomb.

Next day, Saturday (day of Sabbath for Jews), the chief priest went to Pilate and said, “Sir, we remember how the imposter said, while he was still alive, ‘After three days I will rise again’. Therefore, order the sepulchre (tomb) to be made secure until the third day, lest his disciples steal him away, and tell the people, ‘He has risen from the dead’, and the last fraud will be worse than the first”. Pilate said to them, “You have a guard of soldiers; go, make it as secure as you can”. So they went and made the sepulchre secure by sealing the stone and setting a guard.

After the Sabbath, at the dawn of Sunday, Mary Magdalene and another Mary went to see the sepulchre. According to the Biblical account, there was a great earthquake; for an angel of the Lord descended from heaven and rolled back the stone, and sat upon it. For fear of him the guards trembled and became like dead men. But the angel said to the women, “Do not be afraid; for I know that you seek Jesus who was crucified. He is not here; for he has risen, as he said. Then go quickly and tell his disciples that he has risen from the dead, and behold, he is going before you to Galilee; there you will see him”. So they departed quickly from the tomb with fear and great joy, and ran to tell the disciples. Jesus met them and said, “Hail!”. They went up and took hold of his feet and worshipped him. Jesus said to them, “Do not be afraid; go and tell my brethren to go to Galilee, and there they will see me”.

Some of the guards told the high priests all that had taken place. They gave a sum of money to the soldiers and said, “Tell people, ‘His disciples came by night and stole him away while we were asleep’”. They took the money and did as they were directed and spread the story among Jews.

Mary Magdalene conveyed the news of the risen Jesus to the disciples. But when they heard that he was alive and had been seen by her, they would not believe it. After this, he appeared to two of them as they were walking into the country. They went back and told the rest; but they did not believe them.

Afterwards he appeared to the eleven disciples themselves as they sat at the table behind closed doors for fear of the Jews. He said to them, “Peace be with you” and showed them his nailed hands and pierced side of his ribs (The ribs had been pierced with the lance of a soldier to make sure Jesus was dead on the cross). He upbraided them for their unbelief and hardness of heart, because they had not believed those who saw him after he had risen. The disciples were glad when they saw Jesus who said, “As the father has sent me, even so I send you” to preach the gospel (good news) to all nations.

Thomas, one of the disciples, was not with them when Jesus came. When told of the visit of Jesus, he said “Unless I see in his hands the print of the nails and place my hand in his side, I will nor believe”. Eight days later, his disciples were again in the same house, and Thomas was with them. The doors were shut, but Jesus came and stood among them, and said, “Peace be with you”. Then he said to Thomas, “Put your finger here, and see my hands; and put your hand, and place it in my side; do not be faithless, but believing”. Thomas answered, “My Lord and my God!”. Jesus said to him, “Have you believed because you have seen me? Blessed are those who have not seen and yet believe”.

Holy Saturday is marked by vigil, waiting in contemplation and prayer, for the resurrection of Jesus. The idea behind this vigil is that we should do what the apostles failed to do. They failed to keep awake and pray throughout his agony in the garden of Gethsemany – when Jesus caught Peter asleep thrice within the span of an hour. The Easter vigil service is held after dark on Saturday and before dawn on Sunday which itself is the day of joyous celebration of the risen Lord.

Some of today’s English expressions find an echo in the Passion of Christ, which covers his suffering, death on the cross and his resurrection on Easter Sunday. For instance, Pilate “washed off his hands” literally and, thus, “distanced himself“ from the condemnation of Jesus to death, when he said, following the symbolic washing his hands: “I am innocent of this man’s blood; see to it yourselves”. There is yet another instance of “Distancing”. When Judas, the betrayer of Jesus, saw that he was condemned to death, he repented and brought back the thirty pieces of silver, which he got for betraying Jesus, to the Jewish chief priest, saying, “I have sinned in betraying innocent blood”. They said, “What is it to us? See to it yourself”. Another case of distancing and discarding after the purpose is served.

From where does the expression “blood money” come? Judas threw the thirty pieces of silver in the temple and went away and hanged himself. But, the chief priest, taking the pieces of silver, said: it is not lawful to put them into the treasury since they are “blood money”. So, they bought with them the Potter’s Field to bury strangers. Therefore, the field has been called Field of Blood. Incidentally, the betrayal by Judas conforms to the current expression about “biting the hand that feeds”, specially in the context of the Last Supper just a while earlier.