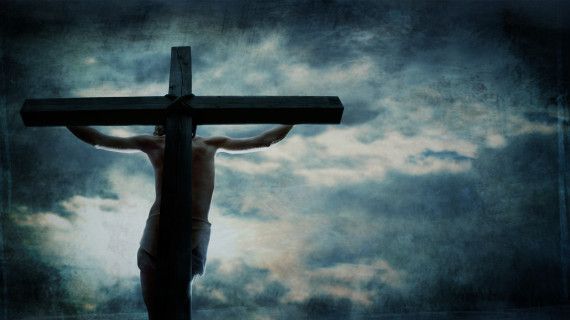 “Who his own self bore our sins in his own body on the tree, that we , being dead to sins, should live unto righteousness: by those stripes ye were healed.” Bible, Peter Ch II, V.24).

Good Friday, which falls on March 25 in 2016, commemorates the painful crucifixion of Jesus Christ. From earliest times it was a day of mourning. The church ceremonies on this day include reading of the Passion of Christ, reciting a string of prayers, unveiling and veneration of the Cross and communion service. The day’s celebrations are held in the afternoon. Since only one service is held on this day, to accommodate the bunched-up congregation, the celebrations are generally held outdoors. In cosmopolitan cities like Mumbai, non-Christians also attend the Holy Week ceremonies noted for their piety and somber dignity.

The journey of Jesus with the cross is preceded by an action-packed eve when Jesus was caught as he emerged from a garden where he was praying. It had been arranged with Judas, one of the twelve apostles of Jesus, that he would kiss his master and, thus, identify him to the crowd that had come with swords and clubs. As pre-arranged, Judas approaches Jesus, greets him “Hail Master”, and kisses him. At this signal, the crowd catches Jesus and leads him to Caiphas, the Jewish High Priest. There they plot to accuse Jesus of claiming to be the king of Jews and, thus, pit him against the Roman Emperor, Caesar, who ruled Israel through his Governor, Pilate.

Despite many questions to Jesus, Pilate could not find any guilt in him and was keen on releasing him. He had Jesus scourged with the hope that the heavily bleeding man’s sight might cool off the accusers. When this did not work, he presented another option. On the impending Passover feast, it was customary to release a condemned prisoner. So, Pilate gave the choice of releasing Jesus and a notorious criminal called Barabbas. But, the crowd bayed for the blood of Jesus with the refrain, “Let him be crucified”. A frustrated Pilate, to forestall imminent riots, symbolically washed his hands and declared: “I am innocent of this man’s blood; see to it yourselves”. And all the people answered: “His blood be on us and on our children!” Pilate released Barabbas and delivered Jesus to the mob to be crucified.

The Passion of Jesus Christ starts with his betrayal by Judas and seizure by an armed mob led by Jewish high priests and scribes. The teachings and miracles of Jesus and the large following he was gathering day by day threatened the vested interest of the high priests. They brought trumped up charges against him and asked Pilate, the Roman Governor stationed in Jerusalem, to condemn Jesus to death on the cross on the ground that he was claiming to be God and king as also rousing his followers against Caesar. Close questioning of Jesus by Pilate on these charges elicited no direct reply and Pilate was reluctant to condemn an innocent man. But, the high priests and the mob cried out for the crucifixion of Jesus. Pilate finally gave in.

Once condemned, the high priests and the mob led him away carrying the cross to a hillock called Golgotha. There Jesus was stripped of his clothes, crowned with thorns and crucified, with two other condemned criminals also crucified on his either sides. After an agony of three hours Jesus died on the cross.

After the Last Supper, at Mount Olive, Jesus told his disciples that when he would be seized by the high priests, they would abandon him and run, as flock of sheep would scatter when the shepherd is struck. Simon Peter, anointed to lead the flock after the exit of Jesus, protested: “Though they all fall away, because of you, I will never fall away”. Jesus responded: “Truly, I say to you, this very night before the cock crows, you will deny me three times”.

When Jesus was taken to the high priest by the mob, his disciples ran away from the scene – except Peter. He followed Jesus into the high priest’s courtyard. A maid came up to him, and said; “You also were with Jesus the Galilean”. Peter said: “I do not know what you mean”. When he went out to the porch, another maid saw him and said: “This man was with Jesus of Nazareth”. Again he denied it with an oath: “I do not know the man”. Then the bystanders came up to Peter and said: “Certainly you are also one of them, for your accent betrays you”. Then Peter began to invoke a curse on himself and to swear, “I do not know the man”. Immediately the cock crowed. Peter remembered what Jesus had prophesied and he went out and wept bitterly.

Judas had betrayed Jesus for thirty silver coins. When he saw Jesus condemned to death, he repented and brought back the thirty pieces of silver to the high priests and elders saying, “I have sinned in betraying innocent blood”. They said, “What is it to us? See to it yourself”. Throwing down the pieces of silver in the temple, he went and hanged himself.

Even unto the last, Jesus had a good thought for his oppressors: “Father, forgive them, for they know not what they do”.