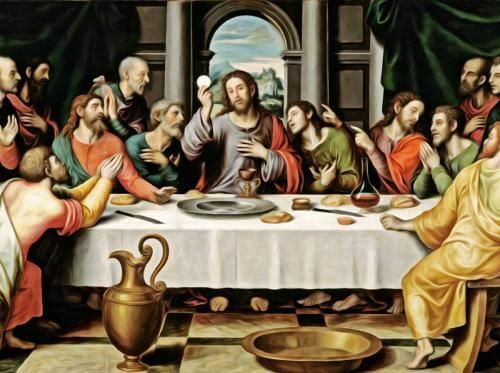 “A new commandment I give to you, that you love one another, even as I have loved you…. By this all men will know that you are my disciples if you have love for one another”

Last Supper takes place on Maundy Thursday or Holy Thursday, which falls on March 24 in 2016, is known for the institution of Holy Eucharist (Christa-Prasad) and the priesthood of the church. When the time came for observing the Passover, the disciples went to Jesus to ask where they should prepare for him to eat the Passover. He told them, “ Go into the city and a man carrying a jar of water will meet you; follow him, and wherever he enters, say to the householder, ‘ the Teacher says, where is my guest room, where I am to eat the Passover?’ And he will show you a large upper room furnished and ready; there prepare for us”. Accordingly, the disciples prepared the Passover.

As they were eating, Jesus took bread, blessed and broke it, gave it to his disciples and said, “Take; this is my body”. And he took a cup (of wine), and when he had given thanks, he gave it to them and they all drank of it. He said to them, “This is my blood of the new covenant, which is poured out for many”. He added, “Do this in remembrance of me” The Holy Eucharist celebrated daily by the priest, wherein bread and wine are believed to be transformed into the body and blood of Christ, is based on this action and command at the Last Supper

A second aspect of Maundy Thursday is the washing of feet of the disciples by Jesus – an outstanding instance of leading by example. At the Last Supper, Jesus rose, laid aside his outer garments and girded himself with a towel. Then he poured water into a basin and began to wash the feet of the disciples and wiped them with the towel.

When Jesus finished washing the feet of his disciples, put on his garments and resumed his place, he said to them: “Do you know what I have done to you? You call me Teacher and Lord; and you are right, for so I am. If then, your Lord and Teacher, have washed your feet, you also ought to wash one another’s feet. For I have given you an example, that you also should do as I have done to you”.

After this, Jesus went to a place called Gethsemany to pray. Then Judas came with a crowd armed with swords and clubs. Judas had given them a sign: “The one I shall kiss is the man; seize him and lead him away under guard”. Judas went to Jesus and saying “Hail Master!”, kissed him and Jesus was seized.

The washing of the feet is enacted by the priests at the parish level and higher ups up to the Pope in Rome. While traditionall the feet of twelve men were washed, Pope Francis deviated from tradition by including women among the twelve. He has since confirmed this mixed participation through an official notification in January 2016.