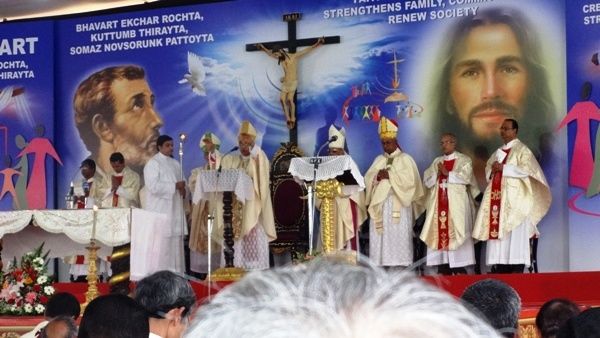 The entrance procession began from the Bom Jesus Basilica to the grounds at 9.30 am.

Bishop Aloysius D’Souza celebrated in Konkani the inaugural Mass of the exposition of the sacred relics of St Francis Xavier on November 22 at the Bom Jesus Basilica grounds.

Archbishop of Goa and Daman and the Patriarch of the East Indies Philip Neri Ferao, Emeritus Archbishop of Goa Raul Gonsalves and John Thomas, the bishop of Itanagar (Arunachal Pradesh), the vicar general of Goa Msgr Jose Remedios Fernandes, Fr Savio Baretto, the rector of the Basilica, along with nearly 300 priests concelebrated at the Eucharist. Thousands of people along with religious sisters were present for the Mass and the veneration of the relics.

Archbishop Philip Neri Ferao extended a warm welcome to all those present, explaining at the same time the significance of the event.

In his homily Bishop Aloysius Paul D’Souza recounted the adventurous missionary life of St Francis Xavier and his contribution to the faith in the coastal regions of India. He also exhorted everyone present, in virtue of their faith, to build communion, strengthen families and renew society which is also the theme of the exposition event. The Bishop presented a summary in English of his homily.

At the end of the Mass, Archbishop Philip Neri Ferrao thanked briefly all those who had laboured so hard for the success of the event. Fr Alfred Vaz, the Convener of the Organizing Committee proposed the vote of thanks in detail. A special mention was made about the cooperation of the Goa government in the organization of the event. Two books on St Francis Xavier were released on the occasion.

The prayerfulness of the liturgy was enhanced by the leadership in melodious singing by the choir.

The inauguration of the exhibition about journey in faith was jointly inaugurated by both Archbishop Ferao and Bishop Aloysius D’Souza.