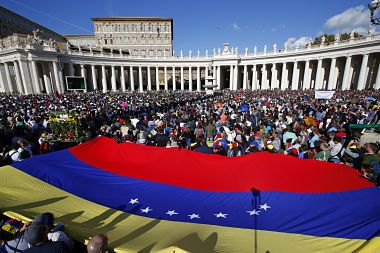 Kochi: Around 5,000 Catholics from Kerala will be present in Vatican City next Sunday to witness the canonisation ceremony of two religious leaders from the state.

A Catholic church from Kochi is taking a delegation to Vatican City that includes priests and nuns, Syro Malabar Catholic spokesperson Father Paul Thelekkat said. “Apart from that, Catholics will also reach there and I am told over 5,000 people from Kerala will witness the ceremony,” he said.

On 23 Nov, six people will be elevated as saints by the Pope who will conduct the ceremony, he said. “People should respect such people who worked tirelessly for the society,” said Thelekkat.

Kuriakose Chavara was born 10 Feb, 1805 at Kainakary near Alappuzha to Iko (Kuriakose) Chavara and Mariam Thoppil. At the age of 13 he began his priesthood study. He entered the seminary in 1818 and was ordained Nov 29, 1829.

Chavara became vicar general for the Archdiocese of Verapoly (near Kochi) in 1861. Chavara was also a social reformer and believed that intellectual development and women’s education were the the first steps towards social welfare. He introduced the system called “a school along with every church” which was successful in making free education available for everyone. Thus schools in Kerala are called pallikudam.

Sister Euphrasia was born as Rosa Eluvathingal 7 Oct, 1877 at Edathuruthy (Ollur) in Thrissur district. She joined the Congregation of the Mother of Carmel and received her veil as a nun in May 1900. She died Aug 29, 1952 and was declared a servant of god in 1987 followed by venerable in 5 July, 2002.

Christians constitute 23 percent of Kerala’s 33 million population and 50 percent of them are Catholics.