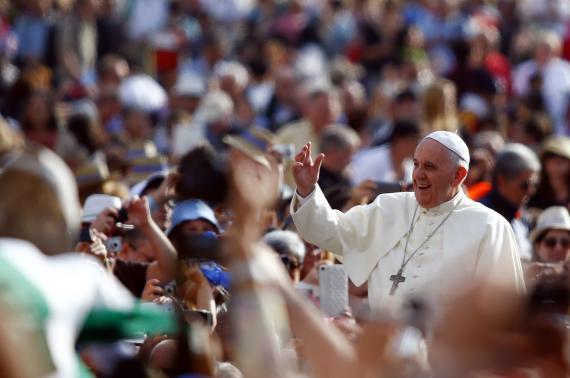 (Reuters) – A global assembly of Roman Catholic bishops is shaping up as the first major showdown of Pope Francis’s papacy, with conservative and progressive cardinals trading insults ahead of its start on Sunday.

The two-week synod on the theme of the family will be attended by more than 250 people — nearly all of them bishops of the 1.2 billion-member Church and also 13 married couples.

The session will prepare the way for a larger gathering of Catholic clerics next year and could become a milestone in the clash between conservatives and liberals over the future direction of a Church that the pope has insisted must become less bureaucratic and theologically esoteric.

The synod, the first since Francis’ election in March 2013, is seen as a test case for him and his vision of a Church he wants to be closer to the poor and suffering and not “obsessed” by issues such as homosexuality, abortion and contraception.

The run-up to the meeting has been dominated by a rare public feud between cardinals centered on whether the Church should modify teachings that ban Catholics who have divorced and then remarried in civil services from receiving communion.

For Catholics, a second marriage without an often lengthy Church annulment of the first amounts to adultery and anyone remarried in a civil ceremony cannot receive communion at Mass unless they refrain from sexual relations with a new partner.

That issue has emerged as the most likely candidate for possible reform after Pope Francis ordered a worldwide survey of Catholics and heard that many ignored Church teachings on birth control, sex before marriage or acceptance of homosexuality.

Cardinal Walter Kasper, a German the pope has called one of his favourite theologians, has argued that the Church must find ways of showing mercy to people whose first marriages have failed and who want to remain an integral part of the church.

But even the suggestion of change has galvanized conservatives, including a handful of senior Vatican officials.

Kasper says the Church needs a “paradigm change” to seek a solution to the problem of divorced and remarried Catholics and suggested that each case should be studied separately and couples possibly given personal dispensation from the rules.

He accused conservative critics of attacking him in order to undermine their real target – the pope.

“It is obvious that there are people who are not in full agreement with the present pope,” he told the Jesuit weekly America. He accused conservatives of political maneuvering and using fear tactics to block potential change.

Kasper’s most vocal critic is Cardinal Leo Raymond Burke, a Vatican-based American arch-conservative, who, along with four other like-minded cardinals launched a pre-emptive strike by publishing a book, “Remaining in the Truth of Christ”, defending the status quo on rules for the divorced and re-married.

Burke, in a conference call with reporters this week, bluntly called Kasper’s position “fundamentally flawed,” accused him of “misunderstanding” basic Church teachings and called some of his statements “outrageous”.

“I have to say that I find it amazing that the cardinal claims to speak for the pope. The pope does not have laryngitis. The pope is not mute. The pope can speak for himself,” he said.

A Vatican source said “the pope is not thrilled” by the sometimes shrill tone of the debate even though he wanted to encourage dialogue. The source said Francis did not want the synod to be dominated by the “clerical ivory tower types”.

Another persistent voice against change is German Cardinal Gerhard Mueller, the Vatican’s top doctrinal official, who has belittled Kasper’s calls for a more merciful Church.

“God’s mercy does not dispense us from following his commandments or the rules of the Church,” Mueller wrote in a book published earlier this year.

After the October synod, participants will continue dialogue locally and return next year for the main meeting. That gathering will present the pope with suggestions that could lead to changes in Church teachings.