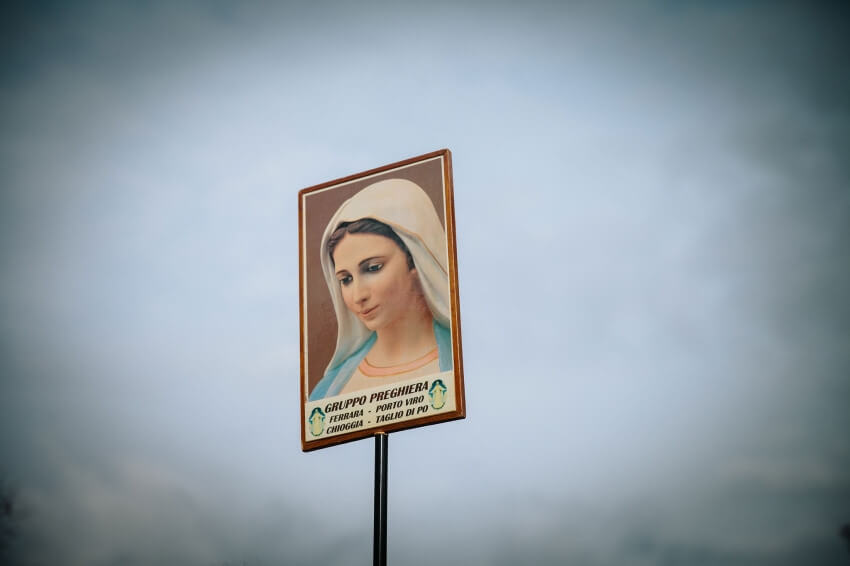 In the December issue of National Geographic magazine, photographer Diana Markosian explores the worldwide devotion to the Virgin Mary.

Her first trip for the story took her to the town of Medjugorje, Bosnia and Herzegovina, which in 1981 experienced its first apparition of the Virgin Mary. Mary reportedly appeared to six children, identifying herself as the “Queen of Peace” and handing down the first of thousands of messages to them. (Some claim she still speaks to them daily.)

The local government tried to squash the reports, but the children persisted in telling their stories. Since then millions have flocked to Medjugorje to seek their own connection with Mary.

Worshippers pray in the village of Medjugorje, Bosnia and Herzegovina, which in 1981 experienced its first apparition of the Virgin Mary when she reportedly appeared to six children.

Markosian set out to photograph some of these pilgrims, but when she first arrived she wasn’t quite sure what to shoot—or how to make the sort of images she was used to creating.

“This was my first assignment for National Geographic,” she says. “I never worked on a story like this and wasn’t sure if I was the right photographer for it. When I spoke to [Director of Photography] Sarah Leen about why she picked me for it, she said because I photograph things that are no longer there.”

Most of Markosian’s prior work has been personal projects that deal with loss, and her subjects participated in the storytelling process, guiding her along the way. (See her projects 1915,School No.1, and Inventing My Father, all of which used a collaborative approach.)

In Medjugorje, she says she felt like she’d been thrown into another world. “I was meeting people at some of their lowest points in life. They needed an intercessor to turn to. They needed Mary. I didn’t know how to respond to this. I am Christian but never grew up with Mary.”

This is the the sign that photographer Diana Markosian posted in Medjugorje in the hopes of meeting people who had seen the Virgin Mary.

After five days in town, Markosian went to a print shop and had a simple sign made that read, “Have you seen the Blessed Mother?” The sign included her local phone number. She posted it in three different locations near “Apparition Hill,” where pilgrims visit a statue of the Virgin Mary.

“I didn’t know what I was getting myself into,” says Markosian. “I wanted to meet people who had some sort of relationship with Mary as a way of connecting to her myself. I didn’t know if anyone would respond.”

Anna Pidlisna, 32, has been ill since childhood. “I closed my eyes and opened my heart. I wanted to understand my illness. I saw myself near the Virgin Mary at the wedding of Cana. She was in a royal-blue dress. She had black hair. I was standing beside her.”

And it was that idea of visions that finally put Markosian on the right creative track, sparking the idea to make collaborative portraits showing a person together with their vision of Mary.

Marinko Ivanovich, 77, lives in Medjugorje near Apparition Hill. He recalls the first days of the apparition. He ran to the hill with the visionaries and a group of people. It was 11 p.m. He stood beside the visionaries, closed his eyes, and bowed his head. “I saw the sky open up, and white light came down,” he said. “The visionaries said, ‘Whoever wants to touch Mary can touch her.’”

“The sign was a catalyst for focusing me in a way that I wasn’t before,” says Markosian. “I was trying to stay away from being literal and wanted to use my voice and my method for telling stories. My personal work is about collaboration, and I was really missing that.”

Gisela Kokvou, 57, from Austria, says the Virgin Mary appeared to her in a chapel in Medjugorje. “I see her eyes coming straight into her body, ” said Kokvou. “She is present, going inside me.”

Markosian commissioned local artist Lisa Abbott, who she met in Medjugorje, to sketch the visions of people she photographed. Abbott worked on the sketches in the evening and would share them with Markosian the next day, even continuing to work on them after Markosian had left town. Abbott described each sketch as a “delicate and intimate encounter” with Mary, and she said she “felt the guidance and personal love of Mary” when doing the work.

Anna Otzinger, 61, from Vienna, describes her vision of the Virgin Mary. “She was so beautiful,” said Otzinger, “She didn’t look anything like the statue. She was wearing a crown of stars and a large white veil, which covered the whole earth.”

“I thought it wasn’t enough just to have portraits and the words— I wanted to visualize it. I wanted to show what these visions look like.”

Diana Markosian is an Armenian-American photographer whose images explore the relationship between memory and place. See more of her work on her website.

Read the full story and see more of Markosian’s pictures from this project in the story “How the Virgin Mary Became the World’s Most Powerful Woman.”