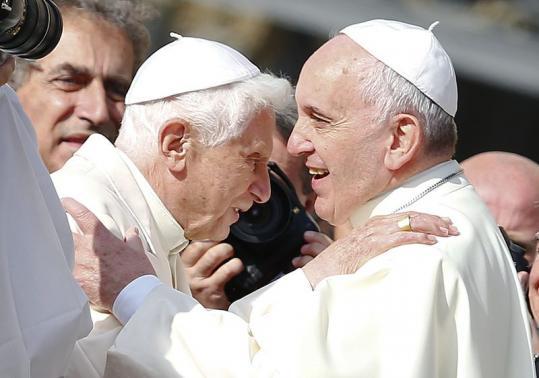 (Reuters) – Elderly people, including former Pope Benedict, attended a gathering of the wise and wrinkled at the Vatican on Sunday, where Pope Francis denounced the neglect and abandonment of the old as “hidden euthanasia”.

The pope sought to underscore the importance of the old in society and he said homes for the elderly could not be allowed to become “prisons” where care took a back seat to business interests by those who run them.

According to the World Health Organization, there are 600 million people over 60 in the world today and the figure is expected to double over the next 11 years and reach two billion by 2050, most in the developing world.

It was only the third time since his resignation in February, 2013 that Benedict, 87, attended a public event. He looked relatively healthy as he walked into the square using a cane and took a special seat in the front.

Benedict, wearing a white overcoat, stayed for about an hour

to hear old people speak about their lives and listen to a speech by his successor and then left before Francis led a Mass.

Benedict, the first pope to resign in six centuries, has been living out his retirement in near isolation in a former convent in the Vatican gardens. He is assisted by aides and receives few visitors.

Francis, 77, warmly embraced his older predecessor twice during the service and told the crowd that having Benedict, who now has the title Emeritus Pope, living in the Vatican was “like having a wise grandfather at home”.

“Violence against the elderly is as inhuman as that against children,” Francis said told the crowd, which was entertained by singers including world renowned tenor Andrea Bocelli.

“How many times are old people just discarded, victims of an abandonment that is tantamount to hidden euthanasia. This is the result of a throw-away culture that is hurting our world so much,” he said.

Since his election as the first non-European pope in 1,300 years, Francis has often called for more respect for the vital role of old people, particularly in rich countries, as vital transmitters of experience and knowledge.

He said homes for elderly people “should really be homes, not prisons” where people live “forgotten, hidden, neglected”.

One of the elderly couples who addressed the gathering, Mubarak and Aneesa Hano, were Christian refugees from northern Iraq who had to flee their home because the area had been taken over by Islamic State militants.

At the end of the service, the pope gave some of the elderly a book of the Gospel of St. Mark in large print.