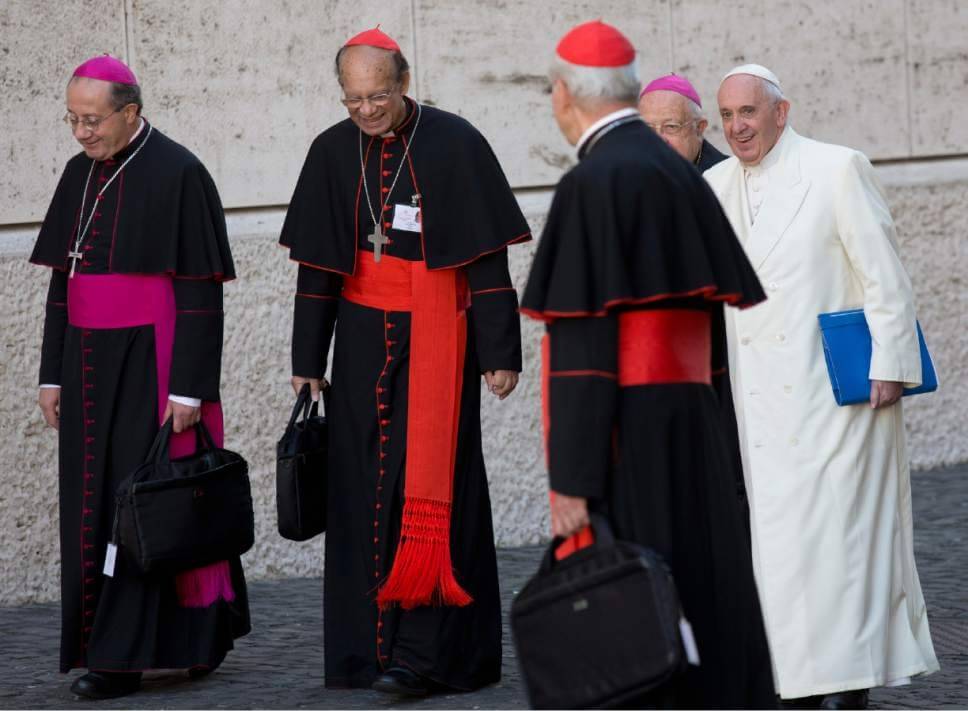 Vatican City • A momentous and divided gathering of global bishops ended Saturday by endorsing ways that could lead to greater participation by divorced and remarried Catholics — a major source of friction here — while the 270 churchmen declined to take up the even more controversial issue of how and whether to be more welcoming to gays.

The final document was an obvious compromise intended to gain support from both reformers and hard-liners and achieve as much consensus as possible.

The three-week meeting of churchmen from all five continents, called a synod, revealed serious theological, cultural and ideological fissures in the worldwide hierarchy.

Some cardinals and bishops blasted gay rights in harsh terms and other said any softening of the church’s practices on allowing remarried Catholics to take communion would be tantamount to heresy.

But by refusing to rule out future changes that would make the church more inclusive, the final product could be seen as a blow to traditionalists’ hopes to put an end to the often fierce arguments that have roiled the church since Pope Francis called for an open debate soon after his election in March 2013.

The often vague language of the concluding report also left the door open for Francis to take further action to provide greater pastoral flexibility to local bishops and priests — as church leaders expect him to do.

Francis himself seemed to signal his intentions as he delivered a powerful closing talk to the gathering Saturday evening that denounced moral legalism in the church and declared that “the true defenders of doctrine are not those who uphold its letter, but its spirit.”

Indeed, the synod process, the pontiff said, was about “laying bare the closed hearts which frequently hide even behind the church’s teachings or good intentions, in order to sit in the chair of Moses and judge, sometimes with superiority and superficiality, difficult cases and wounded families.”

Francis referred to the intensity of the discussions and the occasionally fierce opinions expressed, and “at times, unfortunately, not entirely in well-meaning ways” — a remarkable rebuke to what he apparently saw as the intemperate speeches.

In one widely noted speech, Cardinal Robert Sarah of Guinea, a top official in the Roman Curia, said that “what Nazi-fascism and communism were in the 20th century, Western homosexual and abortion ideologies and Islamic fanaticism are today.”

The pontiff also seemed to refer to the charges of “rigging” and manipulation by hard-liners in the months preceding the synod, and even during the proceedings, in an apparent effort to influence the synod’s or undermine its conclusions.

Instead, Francis said, the meeting showed that the church “does not simply rubber-stamp” foregone conclusions.

“It was about trying to open up broader horizons, rising above conspiracy theories and blinkered viewpoints, so as to defend and spread the freedom of the children of God,” he said, “and to transmit the beauty of Christian newness, at times encrusted in a language which is archaic or simply incomprehensible.”

The lengthy final document contained 94 paragraphs on a range of issues related to challenges facing the family in contemporary society around the world.

Each of them received the two-thirds number of votes needed for official adoption by the synod, but the recommendations are only advisory; it is up to the pope to take any further action, and the synod in fact asked him — as expected — to issue a more definitive document in the coming months.

The final document did not offer any of the openings to gay and lesbian Catholics that had been raised during a preceding synod last October. It spoke only about respecting the dignity of people whatever their “tendencies” and rejecting “unjust discrimination.”

The document, as expected, also reiterated the church’s opposition to gay marriage and reaffirmed that marriage for Catholics is a lifelong sacramental union between one man and one woman.

Progressives said there was such fierce opposition on welcoming language to gays by some churchmen, especially from Africa, Eastern Europe, and from some of the nine American prelates here, that they decided not to press the issue and face defeat — or the prospect of a recommendation that would bar any future opening.