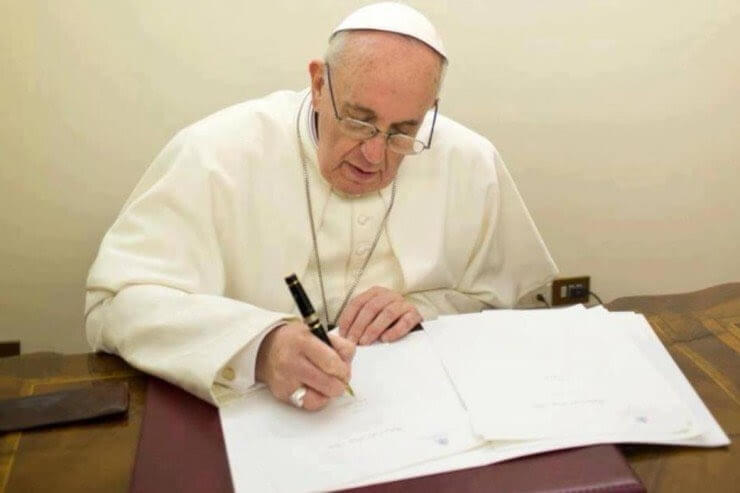 Those Chosen Should Represent Entire People of God: Young and Old, Healthy and Sick.

The Holy Father has written a letter, dated 20 December and published today, to Cardinal Robert Sarah, prefect of the Congregation for Divine Worship and the Discipline of the Sacraments, in which he decrees that from now on, the people chosen for the washing of the feet in the liturgy of Holy Thursday may be selected from all the People of God, and not only men and boys.

The Pope writes to the cardinal that he has for some time reflected on the “rite of the washing of the feet contained in the Liturgy of the Mass in Coena Domini, with the intention of improving the way in which it is performed so that it might express more fully the meaning of Jesus’ gesture in the Cenacle, His giving of Himself unto the end for the salvation of the world, His limitless charity”.

“After careful consideration”, he continues, “I have decided to make a change to the Roman Missal. I therefore decree that the section according to which those persons chosen for the Washing of the feet must be men or boys, so that from now on the Pastors of the Church may choose the participants in the rite from among all the members of the People of God. I also recommend that an adequate explanation of the rite itself be provided to those who are chosen”.

The Congregation for Divine Worship and the Discipline of the Sacraments has today published a decree on the aforementioned rite, dated 6 January 2016, the full text of which is published below:

“The reform of the Holy Week, by the decree Maxima Redemptionis nostrae mysteria of November 1955, provides the faculty, where counselled by pastoral motives, to perform the washing of the feet of twelve men during the Mass of the Lord’s Supper, after the reading of the Gospel according to John, as if almost to represent Christ’s humility and love for His disciples.

In the Roman liturgy this rite was handed down with the name of the Mandatum of the Lord on brotherly charity in accordance with Jesus’ words, sung in the Antiphon during the celebration.

In performing this rite, bishops and priests are invited to conform intimately to Christ who ‘came not to be served but to serve’ and, driven by a love ‘to the end’, to give His life for the salvation of all humankind.

To manifest the full meaning of the rite to those who participate in it, the Holy Father Francis has seen fit to change the rule by in the Roman Missal (p.300, No. 11) according to which the chosen men are accompanied by the ministers, which must therefore be modified as follows: ‘Those chosen from among the People of God are accompanied by the ministers’ (and consequently in the Caeremoniale Episcoporum No. 301 and No. 299 b referring to the seats for the chosen men, so that pastors may choose a group of faithful representing the variety and unity of every part of the People of God. This group may consist of men and women, and ideally of the young and the old, healthy and sick, clerics, consecrated persons and laypeople.

This Congregation for Divine Worship and the Disipline of the Sacraments, by means of the faculties granted by the Supreme Pontiff, introduces this innovation in the liturgical books of the Roman Rite, recalling pastors of their duty to instruct adequately both the chosen faithful and others, so that they may participate in the rite consciously, actively and fruitfully”.