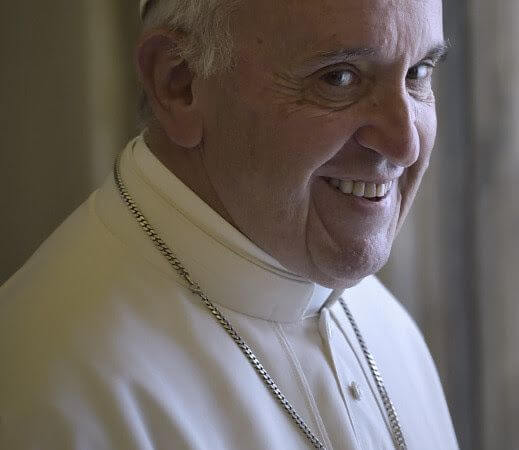 For centuries, the Vatican has been the seat of government for the worldwide Catholic Church, which is still its primary role. In recent decades, however, it’s also carved out a parallel function as one of the world’s premier venues for interreligious encounter.

That capacity to bring people together was on display again Wednesday morning, when Pope Francis hosted a delegation from the London-based “Institute of Jainology” in the Paul VI Audience Hall.

Jainism is an ancient religion based primarily in India, known for its emphasis on asceticism and self-discipline. Ghandi was an admirer, and the Jains have a global following estimated at somewhere between four and six million.

A pope has a unique ability to host these sorts of meetings, since, let’s face it, very few people can resist a papal invitation. On Sunday, for instance, Hollywood A-listers George Clooney, Salma Hayek and Richard Gere happily cooled their heels for an hour and a half waiting for Francis to show up for a brief tête-à-tête … under what other circumstances would that scenario seem plausible?

A fortiori, the same point is even more valid in the world of religion – if you want to assemble the cream of the crop, the pope is about the most powerful magnet on the planet.

In 2002, when St. Pope John Paul II convened the third of his interfaith summits for peace in Assisi, Rabbi Israel Singer of the World Jewish Congress looked at the pontiff and said, “Only you could have brought us together like this!”, and followed that up with a smart salute.

(Singer was later removed on charges of chronic financial mismanagement, but that doesn’t make his point any less valid.)

Today, the Vatican’s point man for these get-togethers is Spanish Archbishop Miguel Ángel Ayuso Guixot, the secretary, or number two official, at the Pontifical Council for Interreligious Dialogue under French Cardinal Jean-Louis Tauran. Born in Seville, Ayuso is the real deal – a Comboni missionary who served in Egypt and Sudan, and who holds a doctorate in Islamic studies.

Recently, Ayuso gave an interview to the Servizio Informazione Religiosa, a Catholic news platform in Italy backed by the Italian bishops’ conference. In it, he argued that each of the last four pontiffs has had a characteristic approach to interreligious dialogue:

Ayuso defined Francis’ “dialogue of friendship” in terms of putting the accent not on where religions differ, on theological disputes or clashes in moral teaching, but rather on where they can come together to defend common humanitarian values.

“All the teaching of Pope Francis is an exhortation to build bridges rather than walls, to look with mercy on the life of others, to have compassion for the poor, and to work together for the good of our common home which is creation,” he said.

“From that perspective, the goal of dialogue is that, thanks to a real collaboration among believers who work together for the good of all, they struggle against the many injustices that still afflict the world and condemn every form of violence,” Ayuso said.

The former rector of the prestigious Pontifical Institute for Arabic and Islamic Studies in Rome was clear that a “dialogue of friendship” is not just a touchy-feely exercise, and certainly not something that ought to make Catholics go soft on their beliefs.

“The dialogue of friendship proposed by the Holy Father is not at all simplistic, superficial or about being a do-gooder,” he said. “It’s demanding.”

“For dialogue, it’s necessary to have an identity. Without a well-formed identity, dialogue can end up being useless, or, worse still, damaging, by leading to relativism and syncretism,” Ayuso said.

The focal point of Francis’ “dialogue of friendship,” as Ayuso sees it, is lighting a fire under religious leaders to be change agents, and not just in the personal, one-on-one sense, but also wielding their political and social leverage to upend the status quo.

He quoted from a recent speech by the Vatican’s Secretary of State, Italian Cardinal Pietro Parolin, to the Italian Senate in that regard.

“A new duty, therefore, is coming into view for interreligious dialogue, which is to motivate religious leaders and their communities to be, and to act, as instruments of peace and pacification, also with regard to their own governments,” Parolin said.

Ayuso called that “a demanding task, but one from which we can’t shrink.”

In other words, the kind of friendship Francis is seeking is designed to have a direct political payoff, in the direction of snuffing out what the pontiff has called a “piecemeal Third World War” in the early 21st century.

Framed that way, Ayuso argued that interreligious dialogue has to be priority.

“At this point, I’d say interreligious dialogue isn’t a luxury but something necessary and essential at the service of the common good,” he said. “That means it has to become routine, daily, in the relationship among the religions.”

In his session with the Jain delegation Wednesday morning, Pope Francis focused his brief remarks on one of his core priorities, environmental concern and the care of creation.

“The earth is important to us, to everyone, because it’s what has given us life and it takes care of us,” he said. “I’d call it ‘Sister Earth,’ who walks with us on our journey of life.”

“Our duty is to take care of it care of it like a mother or a sister,” the pope said, “that is, with responsibility, tenderness and peace.”

In meeting the Jains, therefore, at one level it was about friends getting together, which is often its own reward. At another, however, it was a very “political” pontiff once again trying to expand his coalition, doing what master strategists always do –leading by addition rather than subtraction.