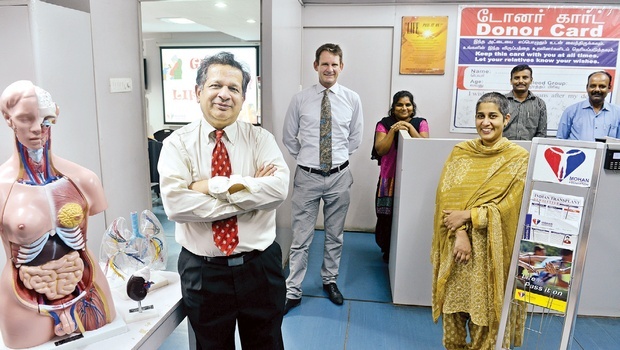 Life simply doesn’t end after death, especially if we help someone survive with a part of us left lovingly behind, so that he or she could lead life a little longer. Organ donation, perhaps, is not a new concept. In mythology, we have examples that organ donation was prevalent even then. Didn’t Lord Ganesha get an elephant head after his own was severed when he was a child?

Today, ‘a gift of life’ is a means to let someone live even when his hopes have withered by failing kidneys or a sick heart. “By donating organs we not only can save lives by transplantation but in many ways we can make the bereaved families aware that by doing so their deceased loved ones continue to live through another person,” says Dr Suman Navin, Co-director of Mohan (Multi Organ Harvesting Aid Network) Foundation, a registered non-profit trust that was established in 1997 in Chennai.

Through Mohan Foundation, a team of doctors and others have been promoting organ donations since its inception by creating awareness and helping people to comprehend the concept. Over the years the foundation has worked tirelessly to move closer to its mission and besides networking with over 50 major hospitals across the country, it has achieved many milestones like training more than 220 transplant coordinators, initiating the first accredited one-year diploma course for transplant coordinators in Asia under Indira Gandhi National Open University, New Delhi, with the support of the Navajbai Ratan Trust, setting up a network of hospitals that can be a source of organ and many more initiatives that have gone a long way to create awareness and promote organ donation.

However, apprehensions surrounding organ donation still continues. “Most of the people,” Navin states, “are still uncomfortable when it comes to organ donation. The fear and risk involved combined with moral implications are inhibiting factors. Thankfully, through the foundation we have been spreading awareness about it and helping people understand the concept behind it.”

What about the discerning factor that only healthy organs can be transplanted into the human body? Dr Navin replies, “Most of our donors are for kidney transplants and these are from victims of accidental deaths. These come under the young, healthy lot who have been pronounced as ‘brain dead’ casualties and provide healthy kidneys for transplantation. “You will be surprised,” she continues, “that in Tamil Nadu alone around five hundred ‘brain dead’ donors have donated their kidneys!”

The organs after assessment are allocated according to age—the young for the young and the old for the old. When asked which according to their experience has been the most successful transplant, she replies, “Kidneys and quite a few heart transplants too. The survival rate for many patients has been anything from five to 30 years depending on the age, health and lifestyle”.

Emphasising the importance of public awareness, Mohan Foundation’s Founder Trustee Dr Sunil Shroff says, “Public awareness is crucial for our work. One donor can, perhaps, save the lives of five or even six.” An FRCS from the Royal College of Physicians and Surgeons in Glasgow, he had worked in the Royal London

Hospital from 1991 to 1995. Prior to his return to India, an adverse comment from a colleague triggered him to venture into a different avenue which would benefit largely the people of India. In 1997, he became the founder trustee of the foundation which now has branches in Coimbatore, Hyderabad, Bangalore, Delhi, Visakhapatnam and Chandigarh.

According to Dr Shroff, the most popular donations have been kidneys and eyes. Any social issues they had to combat? “None whatsoever,” he replies firmly, “when a man’s life hangs by a thread, what does he care who or what caste, race or community the donor is from? All he cares about is living!”

The exceeding demand for donation is a perennial problem. “The demand is much more than what we can supply and 95 per cent of all transplants have come from live donations related and unrelated donors and only 5 per cent from deceased donors,” says Dr Shroff.