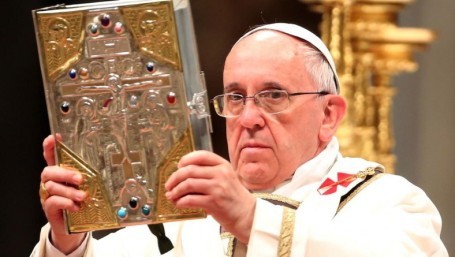 Vatican City (dpa) – Pope Francis has basked in unprecedented popularity since his election in March last year, reviving the scandal-tainted image of the Vatican with his unorthodox, down-to-earth approach.

But his authority has been challenged in the synod – a special meeting of world bishops he has called to discuss how to reconcile Catholic Church teachings with modern lifestyles, but which has exposed major rifts between conservatives and progressives.

“The pope is not free to change the church’s teachings with regard to the immorality of homosexual acts or the insolubility of marriage or any other doctrine of the faith,” US Cardinal Raymond Leo Burke, a conservative champion, told the BuzzFeed website.

Last week Marco Politi, a veteran Vatican commentator from the Il Fatto Quotidiano daily, said he heard from Andrea Riccardi, leader of an influential Catholic charity, that an unnamed cardinal had recently said of the pontiff: “Francis has filled squares and churches. He has fulfilled his function. Now he might as well go, before he ruins the church.”

Minority traditionalist groups have long accused the former archbishop of Buenos Aires of being a “crowd-pleasing pope” who prefers to flow with the times rather than defend cherished Catholic principles.

Italian journalist Eugenio Scalfari has gone as far as suggesting that by stressing the overwhelming power of godly mercy and forgiveness, the pontiff had effectively “abolished sin” – a suggestion roundly dismissed by the Vatican.

In recent weeks, Burke has led the pushback against a proposal by German Cardinal Walter Kasper to drop a ban on the Holy Communion for divorcees who remarry, which according to Kasper has the full support of the pope.

The US cardinal has also protested at overtures towards homosexuals that have characterized Francis’ papacy.

“If a person is gay and seeks God and has goodwill, who am I to judge?” the pope said in July last year. “We cannot insist only on issues related to abortion, gay marriage and the use of contraceptive methods. This is not possible,” he said two months later.

This week, an interim report on synod discussions went further, stating that “homosexuals have gifts and qualities to offer to the Christian community,” but also referring to “the moral problems connected to homosexual unions.”

The document was generally welcoming to all those who do not conform to church rules – such as unmarried couples who cohabit – but remain religious. This was in keeping with Francis’ stated preference for mercy and compassion over doctrinarian inflexibility.

“The Church turns respectfully to those who participate in her life in an incomplete and imperfect way, appreciating the positive values they contain rather than their limitations and shortcomings,” the report said.

Such remarks were likely to have been excised from the final text on the October 5-19 discussions, due to be published later Saturday. Working groups that met this week suggested making radical changes to the interim report.

One said it was “essential for the report to reaffirm in an explicit way the doctrine on marriage, family and sexuality, without any hesitation in resorting to categories of sin, adultery and conversion when referring to situations objectively at odds from the Gospel.”

Another, led by top Italian bishop Cardinal Angelo Bagnasco, condemned “an easy populism” that shies away from confronting the ills of modern society, and recalled the “responsibility also to express judgment stemming from the Word of God.”

A third group, led by Burke, warned against legitimizing sinners. “If we imply that certain lifestyles are acceptable, then concerned and worried parents could very easily say ‘Why are we trying so hard to encourage our sons to live the Gospel and embrace Church teaching?’”

Although he is widely identified with the reformist camp, Francis has not taken a position on specific issues that have animated the synod. But while he has said he was keen to listen to all sides, he has indicated he would not hesitate to press on with changes.

“Freedom [of discussion] is always very important, but governing the church is another matter,” he told Argentine newspaper La Nacion on October 5. “That is in my hands after the necessary consultations.”