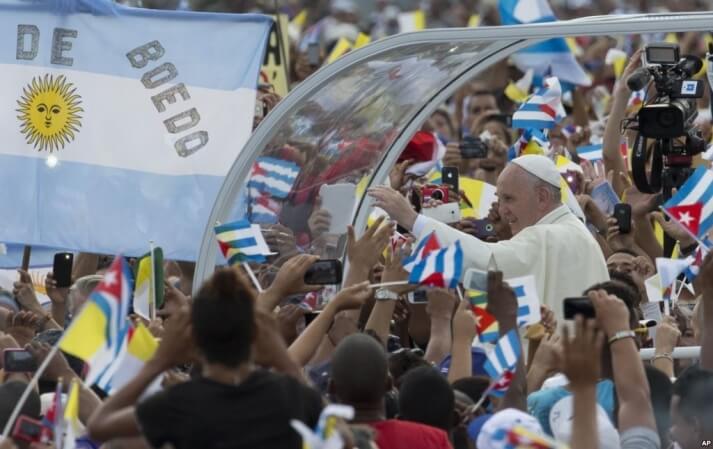 Pope Francis is celebrating Mass in front of tens of thousands of people in the Cuban capital Havana, on his first visit to the Communist-ruled island.

The Pope may also meet the leader’s brother and predecessor, Fidel Castro.

Pope Francis, who is at the start of his Cuba and US trip, has been credited with helping the recent thaw in diplomatic ties between both countries.

After his arrival on Saturday, he hailed improving ties between the two countries as “an example of reconciliation for the whole world”.

But he also urged both Cuba and the US to “persevere on the path” of detente.

Security services were seen arresting at least three people who were shouting and attempting to distribute flyers at the edge of Revolution Square as the Mass got under way.

On his way to the service Pope Francis stopped to greet some of the thousands who had come out to see him.

Ahead of the visit streets have been repaved and the cathedral renovated in Havana.

The Mass marks the first time Cubans are addressed in their mother tongue of Spanish by a Pope – Francis is the first to hail from Latin America.

From early morning, the plaza began to fill with the faithful who have turned out to worship together and catch a glimpse of Pope Francis as he celebrates Mass.

Thousands of people are gathering under a punishing Caribbean sun for the service, which has echoes of the visit of Pope John Paul II in 1998.

And many Cubans – Catholic and non-believers alike – are here to thank him for it.

Pope Francis is also scheduled to meet Raul Castro in a formal meeting, and possibly his 89-year-old brother Fidel too.

“If it happens, it will happen (Sunday). And we’ll get you the necessary information,” Vatican spokesman Federico Lombardi told journalists on Saturday.

It is not clear to what extent – if any – Pope Francis will address in public the issue of political freedom with either Raul or his brother, says the BBC’s Julian Miglierini in Havana.

The Pope praised improved co-operation between the Cuban government and the Church on Saturday, but called for the Church in Cuba to have “the freedom and the means” to pursue its mission.

Both his predecessors, Pope John Paul II and Pope Benedict XVI, visited the island during their papacy.

Francis’s trip will later take him to the US, which he will also be visiting for the first time since his election.