A specially commissioned book, CASK and Fellow Centurions, was  launched at  the opening function, by  Mrs. Margaret Alva, Governor of Rajasthan,  of the year-long centenary celebrations of Catholic Association of South Kanara (CASK). One of the important projects of the centenary year, the book, compiled by noted author and journalist, John B. Monteiro, tracks the history of CASK over the last one century. It is essentially in the form of Readings wherein CASK leaders are projected through their writings on contemporary problems and issues faced by the Kanara Catholic community.

The architecture of the book involves three parts. The first part, Facets of CASK, is the history proper in the format explained above. It is organized under many chapters, based mainly on Mangalore magazine, the monthly official organ of CASK, started in 1927 and published continuously to this day, and presents the progress of CASK, the platform Mangalore has provided, selected creative contributions from the magazine, CASK’s advocacy of the causes of Kanara Catholics, how Mangalore has provided a forum for ventilation of the community’s views and grievances, focus on  mother-tongue Konkani, CASK’s concern for rural folks, specially agriculturists, its social concerns, its role in educating the community on issues affecting it, its involvement in civic affairs, its periodic introspection and course correction, its extra-curricular forays, the catholicity of Mangalore’s editorial coverage, its role as monitor of developments in Mangalore and beyond, and its role in nurturing other entities, nostalgic writings, focus on Mangalore town/city and the survey of support to Mangalore by a band of generous advertisers and sponsors.

The second part of the book is titled “Fellow Centurions”. As CASK marks its centenary, there are a number of Kanara Catholic institutions and entities that have crossed the century goal post. The CASK leadership presents over 50 institutions and other entities in this second part, in the form of articles written by John Monteiro in the print and electronic media over the last decade, chosen carefully and edited to some extent.

The third part, “Concluding Cocktails”, presents a Kanara Catholic hero, the central character of a racy book on sea piracy by an internationally best-selling writer, another story with international facets and involving the Fernandez family of Bolar, as well as a piece on how Catholic civil servants, in the last two centuries under British Raj, have climbed the ladder on the recommendation of their superiors.

The book, with 424 pages, is priced at Rs 500 and is available at CASK Office at Catholic Centre, 2nd floor, and at Jerosa, both at Hampankatta. 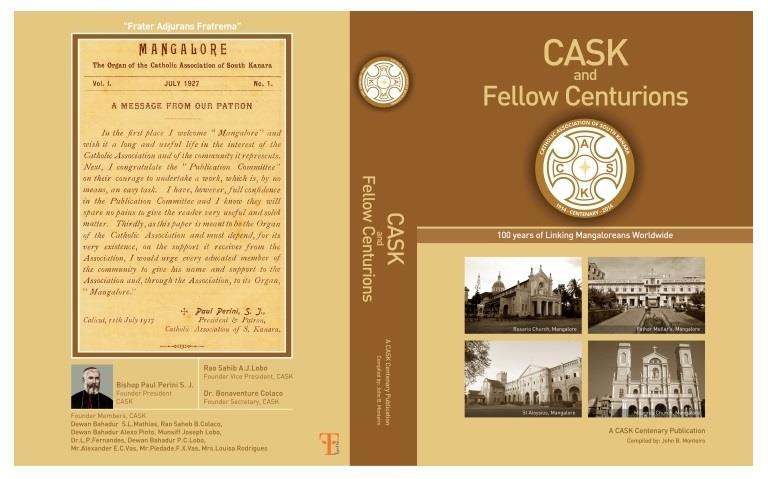