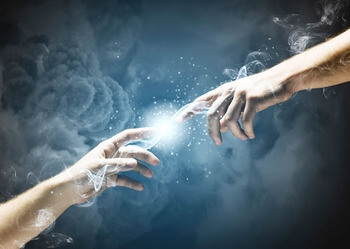 Bit by bit, year by year, almost imperceptibly, we separate ourselves from who we really are. For a lucky few, we somehow rediscover that Self. A beautiful story from the indigenous people of North America teaches this:

In a remote village a child was born. As he grew, he loved to run, play and swim. But most of all he loved the stories his grandmother told. His favourite was about the Singing Stone — a stone of absolute beauty — conferring wealth, power, knowledge, wisdom of the entire world on whoever possessed it. He would ask: “But where, can I find this Singing Stone?” She would sigh and say, “Oh child, I know not; maybe you will find it someday.”

At thirteen, he was to be initiated into the tribe as a man. When he was asked his one wish that must be granted, he knew that it was his strong desire to discover what ‘singing stone’ meant.

Before he set out his grandmother said, “There is a wise and learned scholar in the North, with a library which contains every book in the world. Perhaps there you will find out about the Singing Stone”.

The scholar smiled in welcome when he arrived; of course he could stay for as long as he wanted. Many years later, the young man came to the end of all the books the library contained. For of all the great knowledge in that noble library, he sadly told the scholar, not a single page of a book, had contained a single word about the Singing Stone.

“I know nothing of it,” said the scholar, “maybe the Butterfly Queen of the South can help.”

After many adventures he reached a shining palace of crystal and glass. The Butterfly Queen made him welcome, smiling knowingly at the desire in his eyes. For many years, exotic food, rich clothes and beautiful maidens were his for the asking. He built a fine palace, living a life of great luxury and pleasure. But, after many years, somehow it all lost its appeal; and middle-aged now, he felt something calling from within.

“You have kept me a prisoner here; I lost my purpose. I had come to ask you of your knowledge of the whereabouts of the Singing Stone!” The Butterfly Queen said gently, “The only person who has kept you prisoner here is yourself. As for the Singing Stone, I know nothing; but in the west there lives a great Wizard who may.”

He finally reached the Wizard’s dwelling, staying there for many years, learning all kinds of magic and spells, even surpassing the Wizard in his skill. By now he had completely forgotten the purpose of his coming here. But he wasn’t really satisfied, much to his surprise – and one night he dreamt of his almost forgotten quest.

So he went to the Wizard and said he was setting off on a journey; the East was calling him now. “Have you any knowledge of the Singing Stone” he asked the Wizard. “I have not,” he replied, “but you should follow your instincts and go East.”

After many months he came to a group of small wooden dwellings. He watched as the door of a little home opened and a very old couple came towards him. And he knew that this was his home, this was the place he had set out from nearly sixty-one years ago, and these two people before him were his parents. And as they put their arms around him, his mother whispered softly, “Welcome Home, Singing Stone.”