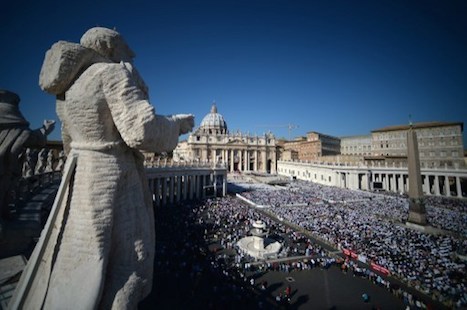 I have just finished attending the Extraordinary Assembly of the Synod of Bishops, convened by the Holy Father, Pope Francis. It was my privilege not only to listen to the debates and interventions, but I also had the privilege of addressing the assembly on the role of the clergy in family renewal.

Much has been written and reported on in respect to this event, truly momentous in the life of the Church. It is my duty, as president of the Catholic Bishops’ Conference of the Philippines, and as a Synodal father, to share with you these thoughts at the conclusion of the synod. It is, as has repeatedly been underscored, only the prelude of more complete discussions in the future that we all eagerly await.

There are two concerns of the Church: first, the Church must be able to extend to all that hospitality, that care, that mercy that Jesus ordained would be the mark of his community, his Body, the Church.

None should be systematically excluded because of circumstances personal to the individual. All should be aided in the path of constant conversion and renewal. All should be offered the hope of the Gospel. All should be comforted by the love of brothers and sisters in the One Body of Christ.

In this regard, Pope Francis warned us of the temptation to be simply “do-gooders”, that in the name of a deceptive mercy binds the wounds without first curing them and treating them; that treats the symptoms and not the causes and the roots.

In the name of misplaced mercy Pope Francis said we face the temptation to come down off the Cross, to please the people, and not stay there, in order to fulfill the will of the Father; to bow down to a worldly spirit instead of purifying it and bending it to the Spirit of God.

This is the reason that the Church must be unceasingly devoted to that discernment by which we all seek out the will of God and read from the Gospels, as interpreted by the Tradition of the Church in a living faith, a response to the questions of our time.

There is also a temptation, according to Pope Francis, of hostile inflexibility — that is, wanting to close oneself within the written letter and not allowing oneself to be surprised by God, by the God of surprises; within the law, within the certitude of what we know and not of what we still need to learn and to achieve. From the time of Christ, it is the temptation of the zealous, of the scrupulous.

Filipinos who presently find themselves in irregular relationships — live-in unions, de facto separation from spouses and partnerships with other persons — must be helped by pastors particularly by the Sacrament of Penance, to follow the demands of true and unselfish love in the Spirit of the Gospel.

We cannot presume to judge and condemn. Rather, the presumption should be that there is a genuine effort on their part to live according to the demands of our faith.

The danger of scandal should never stand in the way of genuine charity, and the Catholic faithful must be reminded that much of what Jesus did was scandalous to the ‘righteous’ of his time.

Where, however, in the pastoral assessment of bishops and priests, the full and unqualified admission of persons in irregular unions to the life of the Church causes charitable and sincere Catholics to doubt and misunderstand the teaching of the Church, then some prudent arrangement must be worked out that will be beneficial to all.

Persons with homosexual orientation are sons and daughters of God; no less than any of us is. Discrimination against them is contrary to the Gospel spirit. Verbal and physical violence against them is an offense against the good Lord Himself.

Through honest dialogue and pastoral accompaniment, it should be our goal to assist them to respond to the demands of chastity and that purity of body and heart that Jesus, in the Gospels, calls ‘blessed’. When they wish to make an offering to the life of the Church according to their talents, abilities and gifts, the Church as mother provides for them.

To the legislators who consider giving legal recognition to same sex unions, the Church declares there is no equivalence or even any remote analogy whatsoever between marriage between a man and woman as planned by God and the so-called same sex unions.

We can be tempted to neglect reality, making use of meticulous language and a language of smoothing to say so many things and to say nothing, said Pope Francis.

In facing our Catholic brethren in painful broken marriage situations or our brothers and sisters with homosexual attraction quietly struggling to be chaste, Pope Francis said we must avoid two temptations: the temptation to transform stones into bread to break the long, heavy and painful fast; and also to transform the bread into a stone and cast it against the sinners, the weak and the sick, adding to their already unbearable burdens.

Our Filipino Catholic laity must be fully engaged in the apostolate of the family, for the family is precisely the competence of laypersons. Active Catholic couples are asked to lead in initiatives that assist couples in living the reality of the sacrament of matrimony, and in the rearing of their families according to the spirit of the Gospel.

Our bishops and pastors encourage and support these lay initiatives.

Archbishop Socrates Villegas of Lingayen-Dagupan is president of the Catholic Bishops’ Conference of the Philippines. He attended the Synod of Bishops in Rome last week.