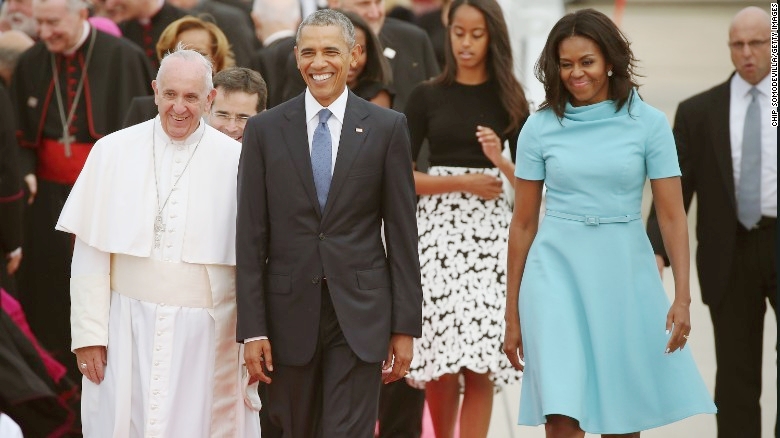 Washington (CNN)Pope Francis immediately dove into the whirlpool of U.S. politics on Wednesday, using his first direct address to the nation to weigh in on deeply divisive issues including climate change, Cuba, and traditional marriage as he was greeted by exuberant crowds packing the streets of Washington.

The pontiff lived up to his reputation for blunt talk at a welcoming ceremony at the White House, introducing himself as the son of the kind of “immigrant family” on which America was built — a clear reference to the controversy swirling around millions of undocumented people in the country.

Speaking in English, the Argentine-born Francis also said he was ready to listen to the “hopes and dreams of the American people” and to offer guidance to those charged with shaping the nation’s political future “in fidelity to its founding principles.”

And in comments that could antagonize Republicans, Francis endorsed President Barack Obama’s efforts on climate change and rebuilding ties with Cuba after more than half a century of estrangement.

Wednesday, which began with pomp and politics and ended with a controversial canonization, was the Pope’s first full day in the United States. The 6-day visit will take him later this week to New York, where he will address the United Nations, and Philadelphia for the World Meeting of Families, a large Catholic event that is expected to draw nearly a million pilgrims to papal Masses.

He told the president that it was “encouraging that you are proposing an initiative for reducing air pollution. Accepting the urgency, it seems clear to me also that climate change is a problem that can no longer be left to a future generation

“When it comes to the care of our ‘common home’ we are living at a critical moment of history,” he said.

Francis is using the global platform offered by his first-ever visit to the United States to emphasize the theme at the center of his two-year-old papacy: challenges like climate change, income inequality and the plight of immigrants are moral — not political — issues. And, he said, the richest, most developed countries have an obligation to act.

“I would like all men and women of good will in this great nation to support the efforts of the international community to protect the vulnerable in our world and to stimulate integral and inclusive models of development,” Francis said, in comments that reflect what he sees as a more inclusive vision of capitalism.

5 things to watch Wednesday with the Pope in D.C.

While some of these themes were sure to please the left, he also delivered a firm defense of traditional values, warning that the institution of marriage and family needed to be protected at “a critical moment in the history of our civilization.” Those remarks could irk liberals months after the Supreme Court ruled in favor of same-sex marriage nationwide.

He said that it was right that society was “tolerant and inclusive” but warned that American Catholics were “concerned that efforts to build a just and wisely ordered society respect their deepest concerns and their right to religious liberty. That freedom remains one of America’s most precious possessions.”

Obama gently — but pointedly — argued that “here in the United States, we cherish religious liberty.”

A brief history of popes and presidents

Obama and first lady Michelle Obama earlier greeted the Pope at the White House as he stepped out of his small black Fiat, which he is using to make a statement of humility in Washington, a city full of limos and hulking government SUVs. In another nod to Francis’ pared down style, the White House dispensed with the 21-gun salute to which he is entitled as the titular head of the Vatican state.

On a glorious early-fall morning, the President and Pope stood together before an honor guard as a band played the national anthems for the Vatican and the U.S.

Obama paid warm tribute to the Pope as an individual as well as the leader of 70 million U.S. Catholics, saying he displayed “unique qualities” of a leader “whose moral authority comes not just through words but also through deeds.”

The president warmly welcomed the pontiff’s support on climate change and Cuba, despite the White House saying Obama wouldn’t use the visit to build domestic political support for these issues.

“Holy Father, we are grateful for your invaluable support of our new beginning with the Cuban people, which holds out the promise of better relations between our countries, greater cooperation across our hemisphere, and a better life for the Cuban people,” Obama said.

The president, who met the Pope for one-on-one talks in the Oval Office, presented his guest with a sculpture of an ascending dove made from metal taken from the Statue of Liberty and wood which once grew in the White House garden.

Francis also took time to minister to the hurting U.S. Catholic Church, meeting bishops at The Cathedral of St. Matthew the Apostle in Washington and offering counsel at a time of great upheaval among his American flock which has thinned partly because of child sexual abuse scandals.

“I know how much the wounds of these last few years have weighed on your spirit, and I have supported your generous commitment to bring healing to victims — in the knowledge that in healing, we too are healed — and to work to ensure that such crimes will never be repeated,” Francis said.

The Pope’s visit brought Washington to a halt. Massive crowds greeted the pontiff as he emerged from the White House complex, standing five or six deep on sidewalks. Several times, his vehicle, a converted white Jeep Wrangler, slowed so the Pope could bless a small child handed to him by a security agent.

In front of and behind the Popemobile, police motor cyclists and black armored Secret Service vehicles fanned out — evidence of a massive security operation being mounted during the Pope’s visit.

He took to the streets again as he headed to a mass to canonize 18th Century Hispanic missionary Junipero Serra who is said to have taken Christianity to California but who is controversial because he is reputed to have treated Native Americans poorly.

Some people had been waiting to see the Pope for hours. At St Matthew’s, for instance, 58-year-old Dolores Reyes was beaming as she wore a T-shirt that read: “Caminando con el Papá Francisco” — Walking with Pope Francis.

“He seems different,” she said. “He is more humble, more connected with people, with everyone. He is a great Pope. I love his approach.”

Earlier, outside the White House, Adriana Cazorla, from Washington state, listened intently as Pope Francis spoke on the big screen and applauded when he said he was a son of immigrants.

“We want the pope to know that 11 million undocumented people are being treated like criminals in this country,” Cazorla said before Francis made his remarks.

Francis’ next political intervention could come on Thursday when he makes an address to a joint meeting of Congress. He will travel to New York and Philadelphia later in the week to wrap up his six-day visit.