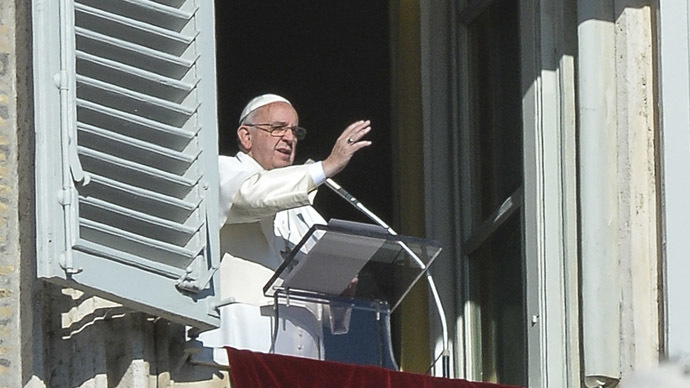 Pope Francis in his New Year address has called on all nations to fight “modern forms of enslavement” and human trafficking. The Pontiff says that millions of people today “are deprived of freedom and are forced to live in conditions akin to slavery.”

“All of us are called [by God] to be free, all are called to be sons and daughters, and each, according to his or her own responsibilities, is called to combat modern forms of enslavement,” Pope Francis said in his first Mass of 2015 at St. Peter’s Basilica in Vatican.

His service marked World Day of Peace, a feast day of the Roman Catholic Church held January 1. This year’s message is entitled “No Longer Slaves, but Brothers and Sisters”.

“Millions of people today – children, women and men of all ages – are deprived of freedom and are forced to live in conditions akin to slavery,” Francis said.

The spiritual leader of the world’s billion-plus Catholics said he thinks and prays for those “who are made objects of trafficking for the sale of organs, for recruitment as soldiers, for begging, for illegal activities such as the production and sale of narcotics, or for disguised forms of cross-border adoption.”

Pope Francis also spoke of those people who were “kidnapped and held captive by terrorist groups, subjected to their purposes as combatants, or, above all in the case of young girls and women, to be used as sex slaves.”

“Many of these disappear, while others are sold several times over, tortured, mutilated or killed,” he said.

According to the Global Slavery Index (GSI) 2014, an estimated 35.8 million men, women and children are trapped in modern slavery.

After the holy Mass, the Pontiff delivered his traditional New Year’s Day noon address to tens of thousands of believers in the Vatican, saying that “peace is always possible but we have to seek it and prayer is the basis for peace.”

“On this, the World Day of Peace, we especially implore her intercession that the Lord may grant peace in our day; peace in hearts, peace in families, peace among the nations.”

May “there never again be wars, but always the desire and commitment to peace and fraternity among peoples,” said the 78-year-old Argentine pope.

The pope has become known for his liberal approaches and stirring statements since assuming his post in March 2013.

In October, the Catholic Church said it is considering embracing homosexual believers, as well as partially accepting same-sex and other religiously unsanctioned partnerships.

On several occasions, Pope Francis has lashed out against capitalism and its footprint on humanity. He also said that all animals go to heaven as “paradise is open to all of God’s creatures.”