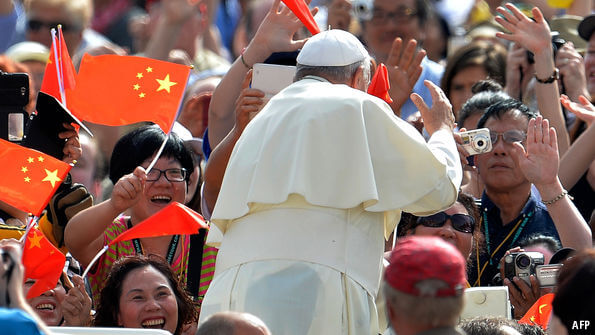 Two articles examine China’s often troubled relationship with Christianity. The first looks at signs of a rapprochement with the Vatican.

IN LATE September Pope Francis and President Xi Jinping happened to visit America at the same time. The coincidence was unremarkable. Both men were there for the annual session of the UN General Assembly in New York. But it afforded Chinese officials a glimpse into something they may not have fully understood: the international stature and popular appeal of the pope. American media covered his every move—each appearance before an adoring crowd, and each ride he took in his humble little Fiat—while paying much less attention to Mr Xi (whose crowds included far fewer supporters and many more protesters than the pope’s).

Chinese officials were “shocked and flabbergasted” by the difference in the responses to the two leaders’ visits, says a Vatican analyst in Beijing. “They thought Xi Jinping was the emperor, the most important guy, and then along came this man in white to overshadow him.” Some observers believe that officials’ awakening to the pope’s popularity may help encourage them to improve relations with the Vatican after decades of diplomatic estrangement. China craves the admiration of great powers. The Vatican may be puny in size, but in soft power it is hard to match.

Relations were already warming up before the two men went to America. In August China’s Catholic church appointed a bishop for the first time in three years. The consecration of Joseph Zhang Yinlin, in the central province of Henan, was striking: it had been approved not only by China’s state-linked church, but also by the Vatican. Also noteworthy was China’s decision in July to allow a bishop who had been appointed in secret by the Vatican to begin working openly. These developments suggested that the two sides were trying to work out ways of co-ordinating their efforts again in the naming of bishops. In 2011 and 2012 the Vatican had excommunicated two who had been appointed by China’s church without papal approval. Another bishop, Thaddeus Ma Daqin, had the backing of both sides when he was appointed in 2012. But Bishop Ma’s renunciation of the Chinese church at his consecration ceremony had caused co-operation to break down.

Since then, much has changed both in the Vatican and in China. At the end of 2012 Mr Xi took over as China’s leader. In an attempt to strengthen the Communist Party’s grip, he launched a sweeping crackdown on civil society. In May last year he said religion must be free of foreign influence—tricky if your faith was founded by, say, a Jew, an Arab or an Indian. Still, Mr Xi has appeared open to improving relations with the Vatican. And Pope Francis, who took over the Catholic church in 2013, also seems to want better ties.

In 2014 China allowed the pope to fly through its airspace as he returned to Rome after a visit to South Korea (in 1995 it had denied similar permission to Pope John Paul II). From his plane the pope sent a message to Mr Xi, invoking “divine blessings of peace and well-being” upon China. This year (in an interview with Francesco Sisci, a Beijing-based journalist) the pope spoke of China’s “great culture” and “inexhaustible wisdom”. In February Global Times, a party-controlled newspaper, said hopes of a thaw had “gained momentum”, and that an official Chinese delegation had paid a rare visit to the Vatican in January (it is popular with Chinese tourists, pictured).

But if a permanent thaw does occur, two groups of Catholics will have cause to worry. The first are those underground Catholics who do not want anything to do with the state-backed Catholic church, even if their boycott of it incurs the pope’s displeasure. Some already privately grumble that recent signs of warming between the Vatican and China amount to a betrayal by the Vatican of those Catholics who have endured considerable hardship, including imprisonment, as a result of their support for the pope. Several underground Catholics are in jail.

The other group is the hundreds of thousands of Catholics in Taiwan. The Vatican is one of only 22 states that have full diplomatic relations with the island, and the only one in Europe. In terms of global status, the Vatican is by far the most important of Taiwan’s friends. China says it will not establish formal relations with the Vatican unless the pope severs diplomatic ties with Taiwan. In 2008 China tried to make up with the island by suspending its efforts to poach Taiwan’s allies. But it discarded that truce last month when it agreed to establish relations with Gambia. Catholics in Taiwan are praying that the Vatican is not the next in China’s sights.