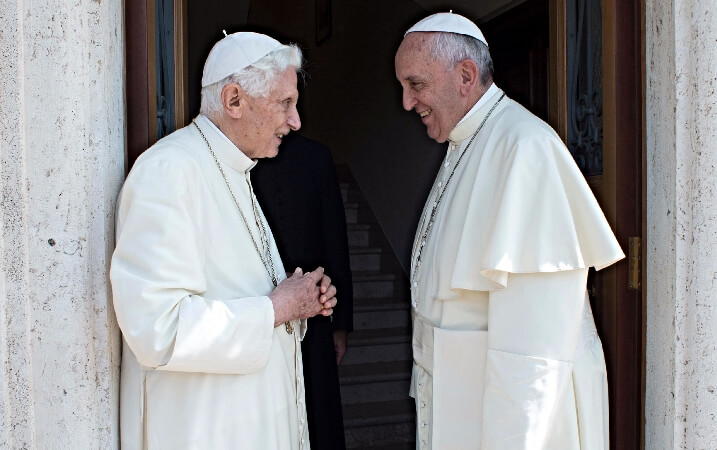 ROME — For Catholics accustomed to traditional ways of doing things, Pope Francis is undeniably a shock to the system.

A summit of bishops from around the world over which he’s currently presiding in Rome is a classic case in point, because Catholics just aren’t used to seeing differences among their leaders play out so publicly and, at times, with such a sharp edge.

The Oct. 4-25 meeting in Rome, called a Synod of Bishops, is the second such event Francis has convened in the past two years to debate matters related to family life. There are 270 bishops taking part, most elected by their national bishops’ conferences, along with 90 experts, contributors, and delegates from other Christian churches.

The first edition of the synod last October featured intense and sometimes acrimonious debate over several hot-button matters, including:

Now that the bishops have come together for the second time, there’s little indication that they have found common ground on those matters. Instead, a fundamental clash remains between those who believe in outreach and dialogue, meeting people where they are, and those worried that the Church must not lose its capacity to call sin by its real name.

Complicating matters further is that some of the rule changes and appointments Francis has made for the synod have produced charges of stacking the deck, especially among conservatives who fear the opposition has been given the upper hand.

Those charges have had enough of an echo that Francis felt compelled last week to give an impromptu address to the synod warning the bishops against succumbing to “conspiracy theories.”

(Only in the Vatican, by the way, could a pope issuing such a warning generate a conspiracy theory of its own. Synod sessions are closed, and in this case the Vatican’s official spokesman didn’t relay the pope’s comment during the daily news briefing. Instead, it was tweeted out by an Italian priest and a fellow Jesuit, prompting speculation about whether Francis had actually said it, and whose agenda was being served by allowing it to be released this way.)

The raucous nature of the synod captures in miniature the spirit of Francis’ papacy. From the very beginning, he’s been a break-the-mold kind of pope.

Americans got a reminder of that during his recent visit when he defied conventional left/right divisions by meeting Kim Davis, the face of opposition to gay marriage in the United States, as well as a longtime friend from Argentina who is in an openly gay relationship.

It was vintage Francis. He exudes a talk-to-everyone ethos, emphasizing that Catholicism needs to get out into the street, even at the risk of getting dirty, in order to make itself relevant. That approach has given Francis enormous popularity inside and outside the Church — including, despite what one might think from some media coverage, generally strong support among the world’s bishops and inside the Vatican itself.

Yet every so often, perhaps especially for Catholicism’s base — meaning staunchly loyal believers, driven to defend the faith against what Friedrich Schleiermacher once called the “cultured despisers” of religion — Francis can be just too much.

For some in that group, Francis represents a break with Popes John Paul II and Benedict XVI. They charge that Francis has exacerbated the Church’s internal divisions, with some even floating the prospect of a “schism,” meaning a formal splintering into rival camps.

A leader of one of Catholicism’s most important internal movements (for the record, a non-American) told me last week that he finds such sentiments among his own following, and therefore has had to think carefully about how to respond.

His answer? Francis is not the repudiation of Benedict XVI, but the “radicalization” of his predecessor’s legacy.

Benedict, he says, understood that a growing rupture between faith and culture has left Catholicism in a deep crisis, and he laid an intellectual basis for rethinking how the Church can engage a post-modern secular age.

Francis, as he sees it, is now jolting the Church out of long-established patterns to allow the rethinking Benedict wanted to occur — not at the price of diluting the Church’s teaching, but in order to revive its capacity to win hearts and to shape history.

In other words, Francis is basically shock therapy for the Church.

Such therapy is notoriously painful and unsettling, often causing patients to experience confusion and disorientation — both of which are palpably present in some circles of Catholicism these days. Yet there are times when it’s the only way to jolt the patient out of a funk.

Psychiatrists will tell you that shock therapy should be used only as a last resort, and it doesn’t always work. It’s effective only about half the time, and even when it does succeed, its effects often wear off over time.

Viewing Pope Francis this way, however, might at least have the side-effect of reassuring anxious elements of his base that he’s not out to harm Church teaching and tradition. He’s actually trying to save it.

Will the Synod of Bishops admit its divisions or paper them over?

One bit of subtext that’s emerged during the first week of the 2015 Synod of Bishops is uncertainty about how exactly the process will end.

Normal synod practice has been for the bishops to wrap things up by voting on a set of propositions, often numbering in the dozens, which are presented to the pope. It’s then up to him to weave those propositions into a concluding document, formally called an “apostolic exhortation.”

Usually it’s taken a year or more for that document to appear, which represented the formal presentation of the synod’s conclusions.

This time around, however, it’s possible that Francis will not issue such a text, and it’s not entirely clear the synod itself will produce a final document either. During a press briefing on Saturday, a Vatican spokesman said a two-thirds vote would be required for a final report “if there is one … we’ll see.”

Working on the assumption that there will be some sort of concluding document, crafting it will be a complicated exercise.

So far, it’s clear that there’s consensus among the bishops that the base text they’re working from during the synod, called the Instrumentum Laboris, needs a serious overhaul.

Among other points, they want it to be far more positive in its discussion of family life, making the point that living a faithful marriage is not only possible, but remarkably widespread. They also want to break what they see as an excessively Western focus, making sure that the distinct challenges and opportunities of the Church in Africa, the Middle East, and so on, find a voice.

While there’s agreement on those points, there’s also sharp contrast over several other matters. They include not just the pre-existing controversies over divorced and civilly remarried Catholics and homosexuality, but also emerging debates, such as whether decisions need to be made in Rome or if there’s room for local control and experimentation.

Clearly, bishops have differing views on that question, too.

“We are talking of the only, holy, Catholic, and apostolic Church,” Njue said. “If we start operating one way in Africa and another way in Europe and so on, then the image of the Church is distorted.”

This is, of course, a religious gathering where each day begins with prayer, and one is obliged to leave open the possibility of a miracle. Solely on the basis of this-worldly logic, however, it’s difficult to imagine that this assembly of alpha males is likely to reach agreement on those issues in the two weeks they’ve got left.

The likelihood that the synod’s divisions will not be resolved by Oct. 25 thus raises an obvious question: How do you craft a final report that most everyone can agree to, when everyone doesn’t agree on the issues it has to address?

Logically speaking, there seem to be three options.

That third option would have the virtue of honesty in two ways.

It would be a candid report on what actually happened, and it would also be an acknowledgement that in the end, the synod doesn’t have the power to make decisions anyway. At most, it can make recommendations to the pope. Ultimately, the choices are his.

(By the way, such a step is hardly unprecedented. In the propositions adopted at past synods, bishops would sometimes recommend “more study” on contentious matters, which was a shorthand way of saying they couldn’t reach agreement.)

The next two weeks will tell which of these options the bishops select — and, of course, whether divine intervention moves them toward an unexpected consensus, rendering these hard choices unnecessary.